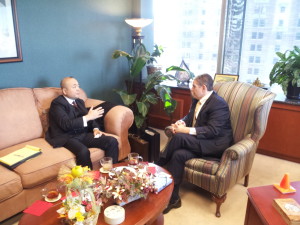 The seven newly elected Commissioners gathered with the Mayor, LRSCC officers and the Consul General at the University Club to get acquainted with each other and receive a briefing from LRSCC President, Barbara Roberts Mason and Mayor Virg Bernero.

The Mayor shared his vision for a globally connected future, and Consul General Katayama spoke about the strong ties of friendship between Japan and the United States.

Mr. Andrew Conti, Special Advisor to the Consul General, also gave remarks about active collaboration between the LRSCC and the Consulate, especially in regard to the April, 2013 Arbor Day Japanese blossoming cherry tree planting and business luncheon.